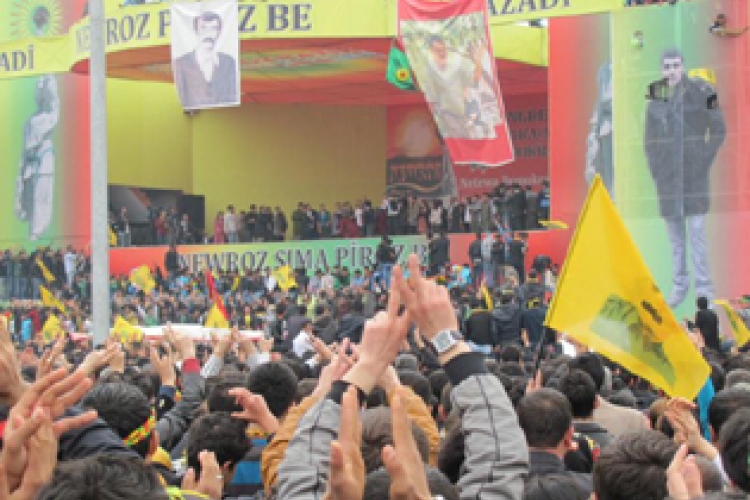 Newroz, the Kurdish (and Persian) New Year, has always had political overtones. This year Newroz happened to fall right in the middle of campaigning for the Turkish national elections, to be held on 12 June 2011.

Newroz, celebrated on 21 March is the most important date in the secular Kurdish calendar. The “New Day” starts the new year and the beginning of spring, but it is also the day Kurds celebrate the mythological liberation from tyranny when the blacksmith Kawa saved his people from the tyrant Dehak. This is why it has always had political connotations for the Kurdish national movement and explains why all celebrations were banned after the 1980 military coup right up until the early 1990s, when the Newroz celebrations became more and more politicized. This year’s Newroz became part of the campaign for the national elections to be held on 12 June 2011. It was used by the pro-Kurdish BDP to show strength and unity, but also to present candidates and political demands.

In the Baglar district of Diyarbakir, the biggest city in Turkey’s Southeast, there is a Newroz Park, which does not much resemble a park, but is more a huge empty field on the outskirts of the city. Because of its size and easy accessibility, it is used for the central Newroz celebrations every year on 21 March. However, this year ithe event was moved to 20 March, because 21 March was a Monday. To attract more people during the daytime, the organization committee decided at short notice to hold the celebration on the Sunday.

Throughout Turkey, the Newroz celebrations have also become BDP (Freedom and Democracy Party) events – the banners, flags and symbols of the pro-Kurdish party are everywhere. But not only of the BDP, also posters of Abdullah Öcalan, the imprisoned leader of the illegal PKK, are omnipresent and not only carried by masked youngsters. Before the lighting of the Newroz fire, many leading BDP politicians gave speeches – most spoke in Kurdish, something which would have lead to immediate arrest only a few years ago. Addressing the estimated 500,000-strong crowd were the Diyarbakir Mayor Baydemir, BDP co-chairperson Kisanak and former party leader Ahmet Türk. All repeated the basic demands of the party for the election campaign: mother-tongue education, a certain degree of decentralization, the release of political prisoners and the lowering of the 10 percent threshold to enter parliament.

The latter point has as a consequence that the BDP does not participate in the elections as a political party, but through independent candidates. This was already the strategy in the 2007 national elections when 21 BDP (at the time DTP, the party was later banned) politicians entered parliament. This time the party’s goal is to have around 35 MPs. The selection of the candidates is not yet complete, but a general trend to have more hawks on the list seems to be prevailing. And the party attaches greater importance in the selection of candidates to the ability to speak one of the Kurdish languages. The non-Kurdish current members of the BDP parliamentary group, Ufuk Uras and Akin Birdal, won’t be candidates again it seems. Since MPs profit from immunity, there will also be some imprisoned candidates in prominent positions put forward in order to get them out of prison, such as Firat Anli and Hatip Dicle.

As much as it was a surprise that the central Newroz celebration was moved to Sunday, 20 March, is was an even more spontaneous decision to cut the celebrations short and have them followed by a march to a central park in Diyarbakir where the BDP had set up a so-called “Tent for a Democratic Solution”. Along the 6km route most Newroz participants dispersed – there were at most 10,000 in and around the park. It wasn’t long until young kids started throwing stones at the police, who responded with water cannons and later with tear gas.

The skirmishes between youngsters and police lasted for about one hour, then music and dancing continued in the tent with the participation of the Diyarbakir mayor Baydemir and BDP co-chair Kisanak. They danced to PKK songs while participants held Öcalan posters. Whereas years ago there would have been more effort to try to distinguish the political party and the illegal PKK, it doesn’t seem to bother many that this is presented as one campaign.

One strategy of this campaign to mobilize voters seems to involve trying to increase the polarization between “us” (BDP) and “them” (state, police, ruling AKP, Armed Forces). One sign was the march and the clashes in central Diyarbakir, but there were other incidents pointing in a similar direction. On 21 March, MP Sebahat Tuncel face slapped the police chief of Silopi (in the province of Sirnak), recorded live by the TV cameras, as was Batman MP Bengi Yildiz filmed with a big stone in his hand during the Newroz celebration/clashes in Batman the same day.

Three days later, BDP leaders announced in Diyarbakir that there would be peaceful protests of civil disobedience such as sit-ins on major squares in cities throughout South-East Turkey – alluding to the Tahrir square demonstrations in Cairo. The party has realized in recent years that the quieter the atmosphere and the more peaceful the situation, the more this profits the ruling AKP. This is also the reason why the PKK ended their ceasefire on 1 March, even though it announced that it would not restart terrorist attacks on Turkish territory – well aware that large parts of the Turkish and also the Kurdish population are tired of violence.

Election campaigns are not periods of logical thinking and political reforms – for that the Turkish/Kurdish electorates will have to wait until 13 June. Then the numerical strength of the BDP group will be important in determining how much influence they can bring to bear on the post-election reform debate centred around the formulation of a new constitution. This new constitution could offer vital changes for the BDP electorate.